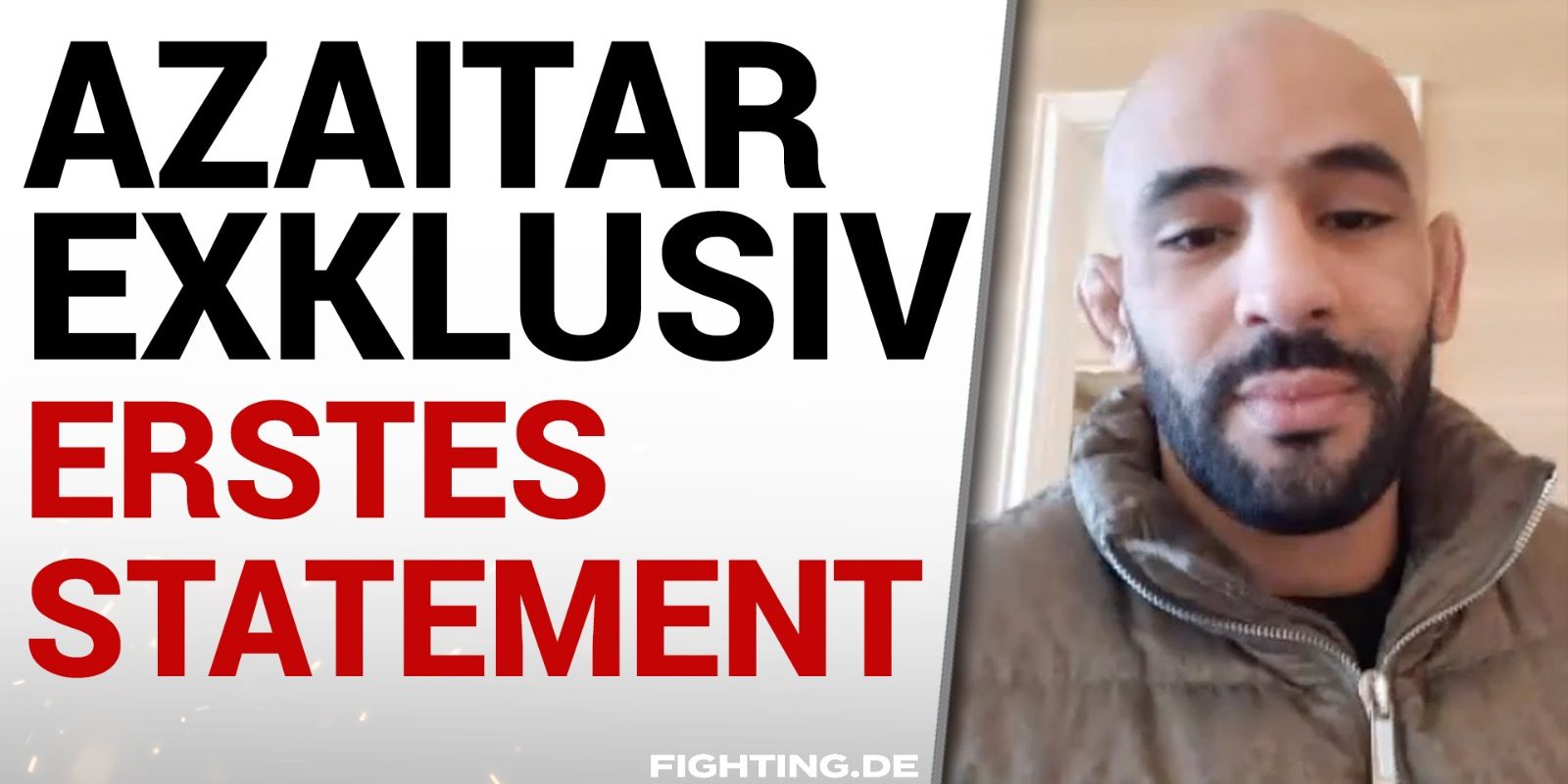 Bergmann: Hey fight fans, it’s a German proverb that the best stories are written by coincidence. That proverb certainly had some truth to it today when we were scheduled for an interview with UFC veteran Ismail Naurdiev, who recently signed a contract with middle-eastern MMA promotion Brave and is currently out in Las Vegas training with the Azaitar brothers for his debut on April 1st. During our talk, Ottman Azaitar briefly disrupted the interview, kidnapped Naurdiev’s cell phone and of course we took the opportunity to let him address the situation on Fight Island, that almost cost him his job in the UFC. This is what he had to say.

Bergmann: Hello! Welcome back to the UFC! Nice move at the media day, yelling ‘I’m back’ and waving that bag to the reporters (laughs).

Azaitar: You saw that?

Bergmann: I didn’t see it, I don’t know if there’s video of it, but I certainly read it online. A couple of journalists posted it. Fun stuff. Congratulations you’re back. Ottman, is this the same sky suite we met in two years ago? Looks familiar…

Azaitar: No, it’s a different hotel. This is the Wynn, we met in the Aria’s sky suite.

Bergmann: Well, thanks for hijacking the interview…

Naurdiev: This is an interview.

Azaitar: Oh, this is an interview? Okay I just got up, give me five minutes and I’m back.

Bergmann: [briefly talks to Naurdiev] Hey Ottman, welcome back! So, is this a double interview now, or what?

Azaitar: What kind of interview is this?

Naurdiev: It’s about my Brave fight…

Azaitar: No, I was asking him. What kind of interview is this?

Bergmann: It’s for fighting.de. Good people. Listen, we are happy that your manager finally revealed what was in that mysterious bag. Potatoes! Who would’ve thought that? [Laughs]

Azaitar: One question, why can’t I see myself? [Mumbling] Okay listen, I don’t know what he told you, but uh… he doesn’t know either. He wasn’t there. [Mumbling] How can I switch the camera?

Bergmann: Yeah, you can switch it and show us around a little bit.

Ottman: This is Ismail. This is my car.

Ottman: With this, I’m gonna show you Vegas now. This is Ismail’s room, Wait, I’m gonna show you Ismail’s bedroom as well. There it is. Here are his supplements. You know Ismail is a little messy. [Runs scooter into the cupboard.] Oh shit, well that’s an insurance case.

Bergmann: Damaging the suite, there you go! [Laughs] Ottman, now that I have you on the phone… This whole bag situation created a lot of hate online. People were speculating what was in that bag, from steroids to who knows what, basically everybody was talking about it. But few people really had the chance or event tried to talk to you about this. Would you like to comment on that situation to straighten things out a bit?

Azaitar: I’m a but unwell since last night, you might hear that from my voice, so I don’t want to talk all that much. Regarding this situation, let’s put it like this: Now that you ask… (laughs). It’s funny sometimes. I love being convicted prematurely sometimes. Sometimes you hold a surprise box in your hand, not knowing what’s in there and you are very excited about it. But when you open it, something silly is in there. Something you don’t like. Or the exact opposite: You’re afraid of something bad and in the end, there’s something good in there. What I want to tell you with this little riddle: People are quick to judge. But you know that. But to be honest: None of these people are paying my rent, none of these people care, if I do well or not. I’m not talking about every viewer or every reporter, I had many supporters as well. But the majority was gloating over this, even some very close friends. They always wish you the best, from the bottom of their hearts, but as soon as you’ve achieve something, they hate you for it. But over the years you have to… these are my clothes hangers, whatever. Sorry (laughs). Over the years you have to learn… [turns to Naurdiev]. Come with me, otherwise I’ll go crazy. [Both are mumbling.] Long story short: Where was I? Ah yes, the bag…

Bergmann: Listen, I agree: Many people jumped to conclusions quickly and speculated what was in that bag. But the fact that we don’t know what was in it makes – whatever it was – way bigger, way worse in people’s imagination than it probably was in reality.

Azaitar: Yeah, the thing is: It could be one way or the other way around.

Azaitar: I just want to say: When I – Ottman Azaitar – will decide to let the public know about this, then only when I want to and when I see fit. Not because someone even thinks he can pressure me mentally and psychologically to address this and perhaps lie about this or whatever. No, no my friend. I am not asking your mother what’s in here purse, do I? I’m not even asking her, if she has a bag in the first place! People shouldn’t always react prematurely after they read something. Of course, Dana White came down there and gave that statement. But Dana White even said it himself that he didn’t know if… you know what I mean? I’m not holding that against him. He has his security guys, and they come up to him and tell him this and that, balcony, blah blah blah. Of course, he thinks that there’s gotta be something to that story and says that in his statement. He even asked in that interview, if he should really do this, if they should really tell this story. Long story short: I don’t want to say that something is not true, and I don’t want to say that something is true. Should you release these words to the public, I want you to keep all of this in it, so nothing can be taken out of context. You know what I mean? This is important to me. I am basically saying nothing right now, this is basically a no comment on that whole situation and the bag itself. I am just talking about my life in general: It’s possible that someone is making a claim about you, it’s also possible that you are really guilty, it’s possible that… [mumbling]. I’m giving you a little riddle, because I promised a Moroccan reporter before you to talk to him first, as soon as I want to address this a bit more openly. I promise you: for the German-speaking region, I will talk to you about the what, the who, the why and so forth. But what I really want to let everybody know is: I won’t do this because someone thinks he can pressure me or bug me, until I say something. And all the people going: “We were supporting you for years, you owe us something” – I owe you nothing, I never borrowed anything from you! I don’t ask what’s in your sister’s purse or your mother’s purse or whatever. Of course, people want to know what I think about this, but I am the master of my own thoughts! And I decide when and if I express them to the public or not. Everything I’m saying here is more riddle than… oh wait, this is my alarm clock. I have to go training.

Bergmann: Look at you, being up before the alarm rings!

Bergmann: Dana White immediately stated you are released, but that’s obviously off the table now. You are back in or never have been out…

Azaitar: Mark, do me a favor. I’ll hand you over [to Ismail] again and I promise you that I will have an honest chat with you about this in the coming days.

Bergmann: That’s a deal! One last thing: Can you already say something about your next fight? Now that you’re back in. Are you fit? When is it going down?

Azaitar: I’m mainly here for my brother Abu. At the same time, I’m training, trying to get ready mentally as if I was having a fight. Should I fight, then before Ramadan. I saw my opponent [Matt Frevola] yesterday and told him to go up and… (laughs). I really did, I have videos of it, but I don’t know if I’m gonna release them or not. Yeah, maybe for fun. We could potentially fight before Ramadan, but that’s something that I can’t decide alone. I would love to, because there’s unfinished business. That’s the only reason, there are no personal reasons. But it depends on what Ali [Abdelaziz] and my brother are telling me. [Frevola] recently lost, there’s nothing to gain for me. I don’t know, it’s tough. We can’t let emotions get into this. A lot of people did this, a lot of people tried this in my past. But as far as my work and my professionalism go, I’ve never let my feelings guide me. Yesterday I was asked if I pick Blachowicz or Adesanya. Of course, I said 50:50. But I’m leaning more towards Adesanya. Why? I saw him fight Romero and I saw him fight Costa. Both tried to taunt and tease him during the fight, but he didn’t play those games with them. He stuck to his game plan and didn’t let himself get distracted. Everyone believes he made it this far, because he’s as talented and strong as he is. But this little quantum of integrity and seriousness, leaving his emotions out of the cage, being professional, focus on what you’ve trained for, for six weeks – that is also a reason. Listen, for a brawl I don’t need preparation. I never had a brawl and took some time to stretch or prepare. That’s where you can bring emotions in. But when you prepare yourself for six to seven weeks, step inside there and the guy [makes a silly face] at you and you grab his arm as if he’s… you’re not professional then. Better stay at home then or go to a bar and have a brawl there. [Hands the phone over to Naurdiev.]

Bergmann: Ismail, nice to have you back. There are one or two questions left, that I would love to ask you.

Azaitar: 10 mins max, he has to go training.

Bergmann: Yes, we’ll make it a quick one.